Our Families Story of Living with Duchenne

Duchenne Musuclar Dystrophy (DMD) is a genetic disorder that is characterized by progressive muscle weakness and deterioration (atrophy). DMD is caused by mutations of a gene that regulates dystrophin.  Dystrophin is a protein that helps to keep cells intact. Duchenne is considered a rare muscle disease but is actually the most frequent condition affecting approximately 1 in 3500 male births. There is no cure.

Meet Corbyn! Corbyn is a sweet and loving one year old boy who came as a surprise to our family. My fiance and I each have 2 children from previous relationships. We had tried to have a child together for quite some time and I even had a few appointments with a fertility doctor. In November 2019, my fiances brother died from suicide and that same month I found out I was pregnant. In February (right before the Covid lockdown) our good friends gifted us with a 3D Ultrasound from Womb with a View and we found out that Corbyn was a boy! Everyone was excited because we already had 3 girls and only 1 boy and they REALLY wanted a little brother. 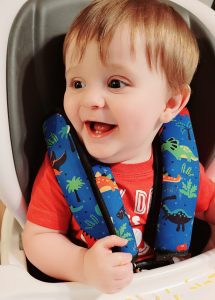 I was excited to be having a boy but In the back of my mind, I was absolutely terrified. My brother, Chad, was diagnosed with DMD around 1993 when he was 5 years old. I was only 9 at the time of his diagnosis and my parents didn’t really explain it to me. Back then doctors and scientists didn’t really know much about Duchenne unfortunately. I remember he walked slowly, fell a lot and he got tired very easily. When he was 12, Chad fell and broke his leg. He ended up in a wheelchair and never walked again after that. When I was growing up, I didn’t fully understand the seriousness of his disease. Looking back, I think I was just used to have a brother in a wheelchair. The only thing I regret is wishing I had done more research and advocating for him. Chad passed away on February 6th, 2021 at the age of 32. 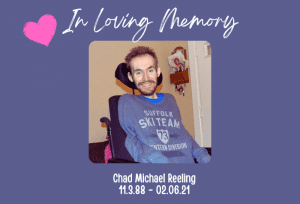 Duchenne Muscular Dystrophy is an x-linked disorder meaning that typically only boys are affected and it is passed down from their Mother. A woman that is a carrier of Muscular Dystrophy can also give the gene to her female children. My Mother had testing to see if she was a carrier a few years ago and the results were inconclusive. Nobody else in our family has DMD. I spoke with a genetic counselor when I was pregnant and we decided that it would be best that I get a blood test to determine if I was a carrier. There was a 50% chance that I am a carrier IF my Mother is a carrier. I found out a few days later that I was in fact a carrier for Duchenne Muscular Dystrophy. By this time, I was about 18 weeks pregnant. After some thought, I decided I needed to know if my son had DMD before he was born to either ease my mind or to plan for his future. I had an amniocentesis done and we waited for about a week before the results came in. 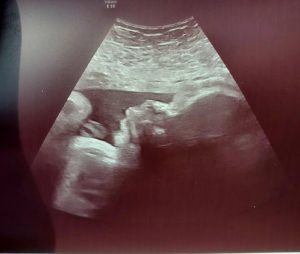 In April of 2020 we found out that Corbyn does have Duchenne Muscular Dystrophy. I can’t really describe my exact feelings at the moment. At that time, we were in the beginning of the pandemic and there was just so much uncertainty. The one thing I did know for sure was that no diagnosis would ever change my excitement and love for my baby. My fiance was at work and I wanted to wait to talk to the children until he got home. My oldest daughter knew right away that something was wrong and I told her right away. Beyond these results, I had a very healthy pregnancy. I had weekly ultrasounds to monitor Corbyn’s growth because he was a big baby. There was some concerns for enlarged ventricles of his brain but an ultrasound after birth did not show anything. We welcomed Corbyn on August 4th, 2020 via cesarean and came home 2 days later! 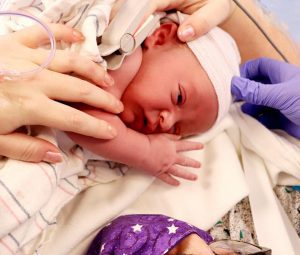 It is very hard to put into words what it is like having a child with a incurable disease. It is heartbreaking and overwhelming but we try to remain as hopeful as possible for his future. When my brother was diagnosed there really wasn’t any medicines or therapies that were suggested to help. Chad did have some aquatic and physical therapy when he was younger but only for a brief time. Corbyn currently goes to Nemours Children’s Hospital, which is Certified Duchenne Care Center, every 6 months for a muscle clinic. So far he has seen Neurology and Physical Therapy. In January we will add Orthopedics, Cardiology and Pulmonology to his list. He has weekly Physical Therapy to strengthen his legs and core muscles enough to be able to, stand, pull up and walk. Once he is old enough to take medicines, we hope to add treatments to keep his muscles strong (especially his heart and lungs). I try to always remain up to date on clinical trials and gene therapies for him. Scientists have developed genetic therapy for some mutations that do not cure Duchenne but help to make the symptoms less severe. Our families specific mutation is a deletion of exon 56. If you’d like to learn more about mutation specific therapies, here is a helpful article.

There is no doubt in my mind that Corbyn was meant to be and we were meant to have him in 2020. I wish his Uncle was here to meet Corbyn but in my heart I feel like Devin sent Corbyn to our family. Corbyn has an aunt in heaven and her birthday is August 4th as well. A lot of people refer to 2020 as being terrible and for the most part, I agree. But having Corbyn allows us to look back on 2020 and remember when our baby boy was born! Working from home has allowed me to be with him daily and for his sisters to bond with him as well since they have been attending cyber school. If Corbyn was my first child, I don’t think I would have ever had more children. Our older children remind us often that they will always help with their little brother. Corbyn was like the missing puzzle piece to our family and he has brought so much joy into our lives. His smile and laughter make everything better. I can’t image a life without him.

We spend the majority of our time advocating and educating for Corbyn and others affected by Duchenne Muscular Dystrophy. I have already advocated virtually to educate our nation’s leaders to get the federal support needed to make real progress in research and care. Our family hopes to be able to go to Washington D.C next year to do so in person. Click here to learn more or to become an advocate.

September is Duchenne Action Month and the perfect opportunity for you, your family and your community to take simple and powerful actions to raise awareness and fund the fight to End Duchenne.

“With the growing recognition of World Duchenne Awareness Day on September 7, Congress returning to work after summer recess, our kids heading back to school and the need to reach out to teachers and administrators about Duchenne, September is the perfect month to take action to raise awareness and crucial funds to support our fight to End Duchenne.” – Parent Project Muscular Dystrophy

JOIN THE FIGHT THIS SEPTEMBER

This error message is only visible to WordPress admins

Please go to the Instagram Feed settings page to create a feed.